Palmyra Sportsmen’s Association located in Central Pennsylvania hosted the 2021 PA S3DA Indoor Target State Championship with archers from across the state meeting to compete. Archers and their families were required to follow COVID facility guidelines, but everyone was very excited to be able to participate in the state tournament. Trent Rutt, member of Reading Archery Club, shot his personal best in the Youth Bowhunter Compound Class to take first place but there’s more to Trent’s story than just a podium finish. You see, while archers and their families have been dealing with COVID, Trent Rutt and his family have been experiencing so much more than just a pandemic.

In August 2019, Trent was diagnosed with a rare liver cancer called Hepatoblastoma (cancer found in children usually under 5) and Hepatocellular cancer (found in teens and adults). He was admitted to Hershey Children’s Hospital and endured several 48-hour admissions where he underwent three rounds of chemo leading up to a liver resection on December 11th, 2019. Following his surgery, Trent had to undergo 3 more rounds of chemo but, they were outpatient, so at least he was not admitted and did not have to stay overnight.

When talking with Trent’s mother, Ashley, she said that their plan was to send Trent back to school following Easter break, but then COVID hit, and all the schools were shut down. People with certain underlying medical conditions, like Trent, were more susceptible to severe COVID symptoms, so he spent his entire 6th grade year at home and Ashley took on a new role, Trent’s teacher. Trent went to his last chemo treatment on March 6th, 2020. His friend, Landon, encouraged him to join the local archery club and Trent did. He began shooting for Reading Archery in August 2020. 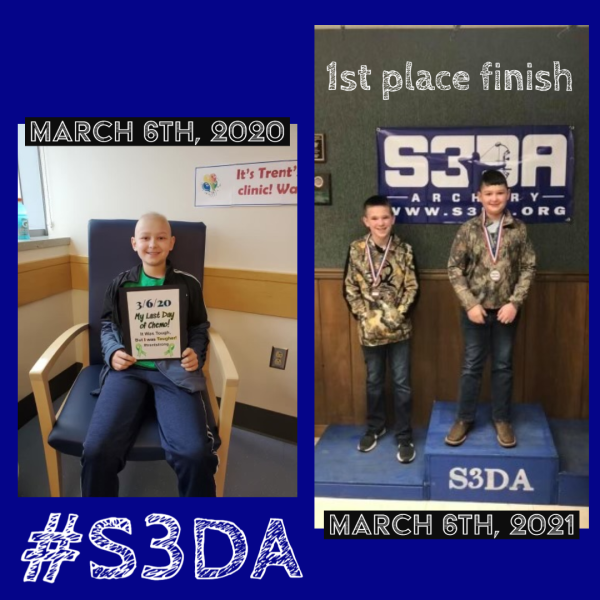 The Pennsylvania S3DA State Championship happened to fall on the one-year anniversary of Trent’s last chemo treatment. While Ashley was incredibly happy, she was also emotional, and stated, “Having Trent get back to an after-school activity has really helped him build his confidence and has gotten him back to feeling like a normal kid. It has helped him ease back into being a part of a group. Trent has always enjoyed sports and enjoyed being a part of a team. The cancer really made him cautious. When he was cleared to return to physical activity, he was leery about rejoining any team, for fear he would get hurt. Archery has been that confidence booster that he needed to help him find his strength again. Archery has also given Trent and his Dad another outdoor activity to bond over. In fact, one huge bright spot for the year happened on December 11th, 2020, when Trent was able to harvest a 4-point buck with his gun.”

Every year a new generation of archers line up at the shooting line and while we have no idea what they may be going through or what is on their mind, we can all relate to the enthusiasm and spirit that each child brings to the competition. For Trent, there is no more chemo and many fewer follow up appointments. Fast forward to today when Trent is now able to go to school and be a normal 13-year-old boy. As many are aware, having archery to concentrate on can help get you through a very tough time, Trent is proof of that.