Michigan S3DA started their 3-D competition season in early May at Central Michigan Sportsman’s Club with archers from various S3DA teams gathering to compete. Michigan S3DA staff did an amazing job of providing archers and their families health and safety guidelines after what has been an archery season full of pandemic woes. Archers were excited to get outside and be on the range with their friends. Michigan S3DA ended the month with another opportunity for archers to qualify for the State Championship by hosting a 3-D regional qualifier at West Michigan Archery Center.

“It is wonderful to see so many children involved in archery. You can tell they have fun and enjoy being with each other and it was a pleasure to get to see them all together again on the course. They had huge smiling faces, and some giggles along the way!” Andrea Koopman, Shoreline S3DA Coach. 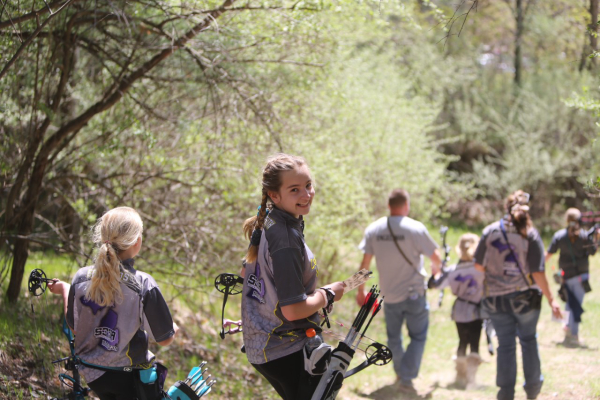 Michigan S3DA State Coordinator, Cara Waite stated, “I cannot state enough for how well these kids cheer each other on at each of these events. I had a mom recently tell me how much her son’s confidence has increased since he started shooting archery and became a part of S3DA. Watching these kids grow in their friendships and their archery is remarkable. There are lifetime friendships being made on these archery courses among the archers and their families. I am so proud to be a part of this archery community in Michigan.

“I really enjoy shooting with my S3DA team and getting to meet new friends. I was excited to be able to shoot at a different club instead of my home club. Even though we are competing it is a friendly one and everyone helps and encourages each other,” stated James Waldron, Central Michigan Goldstar archer.

Michigan S3DA is looking forward to their upcoming State Championship on June 12th, 2021, at Central Michigan Sportsman’s Club. For more information on how to become a member, start a team or become a coach of Michigan S3DA, check out the Michigan S3DA Facebook page!

Brody Popp is in the 1st grade and currently attends St. Mary’s Springs Academy School in Fond Du Lac, Wisconsin. He is a current S3DA member of Nocked N Locked in Fond Du Lac, Wisconsin under Head Coach, Johnny Herbeck. Brody’s interest in archery was influenced by his dad exceedingly early in his life. He wanted to hunt whitetail deer, but he was too small to hunt with a compound bow. With a lot of convincing and a good report card, Brody earned his very own Bear Saga 370 Crossbow at the age of five. Later that year, he shot his first buck on his own and is determined to now be an archer for life. 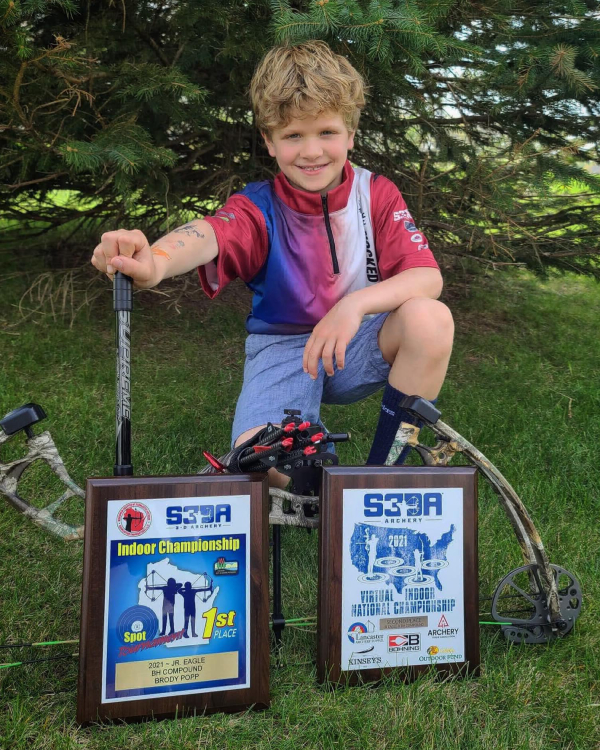 Brody has always enjoyed the outdoors and sports as he currently participates in baseball, basketball, golf, hunting, fishing, and archery. Although he is new to the sport of archery and only started shooting roughly six months ago, he seems to be a natural talent. He was introduced to competition archery at Nocked N Locked Archery Club by his dad’s colleague. Brody showed up to observe and within moments another club member had a bow in his hand. Brody joined the club and has went to every practice that he can. Brody received his own Bear Archery Compound bow for Christmas, the Bear Cruzer G2, and is having a lot of success. Brody finished in 1st Place at the Wisconsin S3DA State Indoor Nationals with a 291/300 and 2nd Place at the S3DA Virtual Indoor Nationals with a 147/150. He just won his first 3-D regional shoot and is now preparing for 3-D State and attending S3DA 3-D Nationals in London, Kentucky, on June 17th-20th, 2021.

While reflecting on his archery career thus far, Brody says one moment he will never forget is his very first shoot. He was competing in an Indoor 5-Spot shoot and he shot three arrows at the wrong target before a fellow archer told him. Those arrows cost him a lot of points and a first-place finish. It was a very painful moment for the parents to watch, but it was a good lesson to learn at an early age. One mistake that Brody says he will hopefully never make again.

“Brody is only seven but has the determination and maturity to excel in anything he does. The Nocked N Locked Club and the entire S3DA program has been so welcoming, and we are happy to be a part of it. The time and effort everyone puts in to make all the practices and events run smooth does not go unnoticed. We are extremely proud of Brody’s accomplishments, but we stress to always stay humble and kind. He has a bright future in archery, and we are so excited to watch him grow in this great sport,” stated Brody’s mother, Kelly Popp.

Bear Archery partners with Scholastic 3-D Archery to help educate, guide, and inspire the next generation of archers. Bear Archery makes great bows that kids can grow with and the Popp family is all in on their bow line-up. Brody is very excited to compete with Bear Archery’s newest and bestselling bow, the Bear Legit, at some upcoming events. Brody has three younger siblings that also have a strong interest in archery and are following in his footsteps. It won’t be long until the Popp household is having shoot-outs in the yard with their Bear bows.