Tennessee S3DA held their 8th Indoor Regional of the 2021 competition season at Crossroads Archery in Knoxville, Tennessee. Although there are still COVID restrictions in place in Knox County, approximately fifty archers from eleven teams entered the facility throughout the day to compete and qualify for the 2021 TN S3DA State Championship. Archers and spectators understood the guidelines and had no issue with keeping everyone’s safety at the forefront of the event. Tennessee S3DA staff did an amazing job to ensure the event ran smooth and everyone was highly satisfied that they were able to compete.

Mallorie Horton with Taylor’s Archery competes in the Jr. Eagle Barebow division. This is Mallorie’s first year with S3DA. When asked about her experiences thus far, she said, “My favorite part of the tournament is getting to display all the hard work I have put into archery. I enjoy competing and honing my skills and I especially enjoy meeting new people at every event.” Mallorie’s father, Dustin, added, “I love Knoxville so it’s always fun to come out for the day. I thought this tournament was very well organized and fun for all competitors. I think S3DA is a great organization and I am glad that we got involved. This program provides shooters something to work towards. I am looking forward to being more involved in the future as a parent and coach.”

Tennessee State Coordinator and Crossroads Archery Coach, Robert Carter, talked about the COVID related changes that have been implemented this season. “We have reduced the shooting line to half capacity to allow for social distancing between the shooters. Masks are required for everyone who enters the facility and spectators are limited. The attendance numbers are restricted, so the tournaments are being broadcasted in real time through Facebook LIVE. We have also transitioned to a virtual format for awards. Despite all the changes, TN S3DA has seen tremendous participation during this 2021 Indoor season.”

Tennessee S3DA archers returned to western Tennessee for the third time this season to compete in an Indoor Regional Qualifier sponsored by Mack’s Camo Connection. Over one hundred archers from twelve S3DA teams shot over the course of five flights beginning Friday evening and concluding Saturday evening. While this event is normally held at Mack’s range in Atwood, Tennessee, the Tennessee S3DA staff decided due to the continuation of COVID restrictions the event would be moved to the Carroll County Civic Center. Tennessee S3DA staff issued guidelines that included: temperature checks at the entrance, hand sanitizer stations, restriction of one spectator per archer, required face masks except for when in the act of shooting and a maximum of twenty-two archers per flight. This was the third Indoor regional Tennessee S3DA was able to host at the Carroll County Civic Center this year and the largest S3DA tournament ever held in western Tennessee. 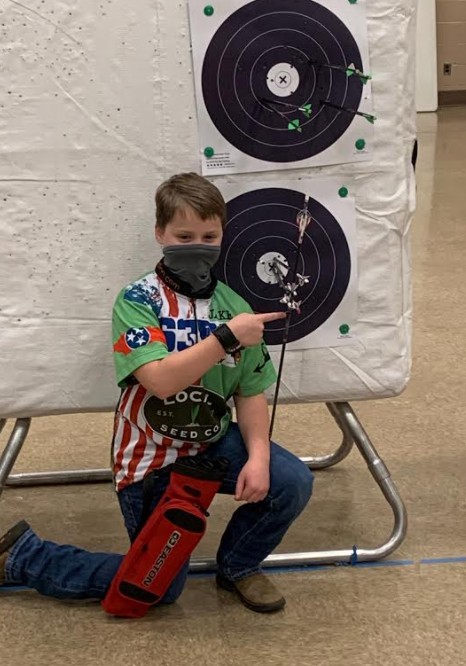 All Tennessee S3DA archers must compete in three Indoor Regionals as well as the Indoor State Championship to qualify for the coveted Shooter of the Year belt buckle given to the top scoring archer in each division. Many of the archers that competed in this event have already shot in five or more regionals this season, but they continue to compete and improve scores at each event. Despite all the unforeseen circumstances, TN S3DA participation continues to climb.

Georgia S3DA leadership decided early on that they would begin indoor season as soon as possible, allowing teams the opportunity to transition to 3-D season and get back outside. Following all state mandated COVID restrictions, GA S3DA managed to host four indoor regionals with over four-hundred student archers participating through the month of January. The decentralized approach to regionals was a new concept for Georgia S3DA that proved to be successful. Georgia S3DA State Coordinator, Jake Martin, attended each event and stated, “I was incredibly impressed with how professional each event was run. Allowing the regional coordinators to plan, source and run their own tournaments allowed them to develop better relationships with the teams and coaches within their region and they continue to learn more about the intricacies of facilitating archery tournaments. 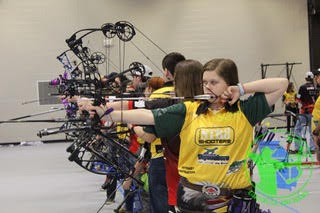 Coaches, parents, and archers had mixed feelings about the rapid pace of the season, but everyone was extremely happy to just be able to compete after a long hard-fought competition season in 2020 dealing with the pandemic. Georgia S3DA finished their indoor season with a bang and went all out for Valentine’s weekend. Banks County School system provided an amazing venue that allowed Refuge Archery range to set-up 25 targets. On February 13th, Georgia S3DA ran lines at 9AM and Noon to decide their state champion and then moved straight into hosting the 2021 “Virtual” Indoor Nationals with lines at 5PM and then continued the next day at 9AM.

Georgia Conservation Coordinator, Trip Penn, wanted to mark the end of the indoor season and the transition to 3-D with a special event, so a 10-target Indoor 3-D Team event was created. Trip stated, “This was a large venue with a lot of open space, so we couldn’t let it go to waste.” S3DA students were able to pair up to make a team or shoot with a parent or coach. At the end of the day a total of thirty-eight teams shot in the 3-D conservation event. The winning teams were presented with gift certificates to Genesis L.A.W. and awarded Kindle Fires and various other archery related items.

The weekend was a huge success with 180 students competing in the Indoor State Championship and “Virtual” Indoor National Championship. Students were able to pick up all their regional awards throughout the weekend and parents were able to recreate podium photos from the regional events. The weekend could not have been possible without the continued support of the state sponsors, teams, parents, coaches, and community support. Georgia S3DA would like to say “Thank you” to everyone that made it possible as they move forward with the start of 3-D competition.